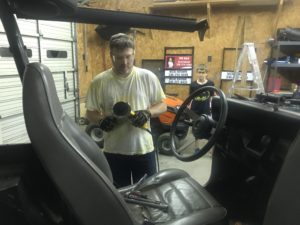 Tonight my 11-year-old son asked if he could come out and help me with the Jeep so I invited him to come on.  He hasn’t ever really been exposed to this type of work (not that I have either, but I do know what a wrench is and how to use it).  It’ll be a fun experience for him, I hope.

Our task to day is cutting out a patch from 1/8″ steel plate that I bought from Lowes.  I also bought a couple of blades for my jigsaw and we’ll see how it goes.  (Yes, I know I should use 3/16″ but I didn’t realize that when I bought the plate.  Don’t judge.  I’ll redo it later, but tonight my son and I are going to experiment because I haven’t cut out patches from this thick of steel either.)

Safety glasses and gloves for everyone!  And then we were off.  We started with a piece of cardboard to rough out the size and shape of the piece that needs to be cut from the metal.  Since one side of the patch will have to go around the 3″ pipe that connects both halves of the frame just under the grill I showed him a simple trick I had seen on YouTube to transfer the shape to the cardboard (yes, I’m officially YouTube trained).  I rubbed a little WD40 on the end of the pipe and pressed the cardboard against it to transfer the circle to the cardboard and then cut it out with a box cutter.  Then together we went about shaving it down to fit the piece that we want to replace.

Once we had our template it was easy to transfer the dimensions onto the metal with a sharpie.  Then on to the jigsaw and a lot of vibrating later we had our piece.  I had to do a little hammering and grinding to get it to fit just exactly right and I think my son was pretty impressed with the whole process.  We marked up the final piece with arrows so we would know how to situate it later and then set it aside.

I plan to get my brother’s welder in the next week or so and will weld it on then.  (I have no experience in MIG/Flux-core welding so that’ll be another post coming soon.)

Another job successfully completed (even though I’ll likely cut it out of thicker steel later and still have to clean up the frame where I’ll mount it later).