Last time I completed my first exterior patch.  Today I get to do almost the exact same thing but on the other side.  The process is pretty much identical and the patch is needed both for the floor and in the rocker panel as the rust goes through both.  This side is a bit worse than the other as I knew ahead of time the rust had eaten holes in both pieces.

The good news is that now I have some practice so this should go rather smoothly.

I started out with the cutting wheel and cut out the rocker panel and the floor.  Each cut I’ve learned should be as straight as possible and the corners as square as I can make them.  This helps tremendously with the fitment of the patch piece because it’s much easier to cut in a straight line than on a curve.

Once I had all the pieces cut out I tack welded the floor and then moved to the rocker panel patch.  I’m still using Flux-core wire in my welder so the process is slow and tedious.  I’ve watched a lot of YouTube videos and I’m sure if I were to switch to TIG that the welds would be easier/cleaner than what I’m laying down.  While I’m getting better each weld only looks slightly less than swiss cheese (partly because if I run a long weld it’ll warp the metal and partly because I’m just not that good at it yet).

It turned out okay I think.  My goal is to have to lay less than 1/8″ of body filler over the Jeep before I paint and so far I think I’m meeting that goal. 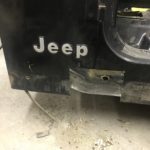 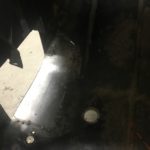 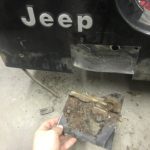 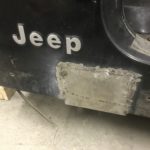 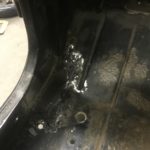 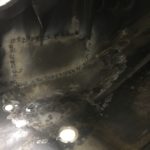